The Risk of Disengagement

Despite these efforts, the megachurch has been constantly criticized for the sheer number of attendees per service would mean that there will be people who won’t get engaged or given enough attention.

Additionally, the setup of the worship service with a high stage and a large number of congregants can give off the impression of a concert.

Consequently, the attendees are mere spectators and faces in a crowd. Thousands more choose to attend for the thousands of people who choose to commit to the megachurch and get involved. They do so simply because they get to live in some anonymity. They cannot do that if they join a smaller church.

A large number of attendees attend each service. Therefore, some locations can host more than 5,000 people at a time. The multiple services run each weekend.

The majority of the people are scrambling out of the venue even before the service has ended. There isn’t really time to talk with friends afterward, nor can people loiter inside the hall because everyone has to be cleared out, and the room must be re-done completely within 15 minutes.

We are guilty of pointing a lot of fingers in the way of megachurches for their strict programs. The traditional churches would claim that these megachurches leave no room for the Holy Spirit.

Moreover,  they would accuse the megachurch of the “specularization” of something that is supposed to be sacred.

Is it too personality-driven?

A harsher criticism is that megachurches follow a largely questionable ideology.

For instance,  megachurches are largely leader-driven, with one specific point person that most churches look up to.

This can be the senior pastor or the president of an organization of ministries. But while this leader is almost certainly of ministerial position, this leader is a minister who cannot attend to everything. Most attendees have probably never met the leader in person.

The purpose then of the leader is to embody a vision and get the members to act on this. The criticism for Christian celebrities is present. It adds to the seemingly impersonal setup of megachurch services.

At the end of the day, megachurches have done their part in making ministries and discipleship available for all who attend. To balance out the distance between the senior minister and the general attendee, they have employed small groups, also known as Bible studies, care groups, or fellowship groups.

As a solution to the increasing number of attendees, the megachurch has chosen to empower its leaders and allow them the authority to shepherd and disciple their communities within these groups. In this context, they really get to build relationships with each other and discuss their personal problems, along with Biblical truths. Those who attend small groups are active members. Most megachurches make it a foundational requirement for volunteers and leaders. In this scenario, the small group leader then takes on the role of being a minister to his or her members. 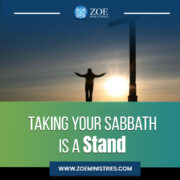 Do You Want More?

Taking Your Sabbath is a Stand