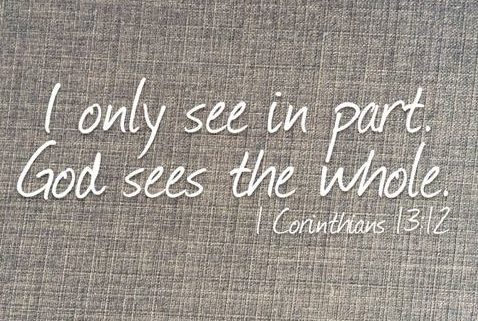 Acts 3, Peter and John were on their way to the temple one afternoon when they healed a man who had been unable to walk since birth. When this man saw Peter and John, he asked them for money or some form of aid. “Peter looked intently at him, as did John, and said, ‘Look at us.’ [The lame man] fixed his attention on them, expecting to receive something from them. But Peter said, ‘I have no silver or gold, but what I have I give you; in the name of Jesus Christ of Nazareth, stand up and walk.’ And he took him by the right hand and raised him up; and immediately his feet and ankles were strong. Jumping up, he stood and began to walk, and he entered the temple with them, walking and leaping and praising God” (Acts 3:4-8 NRSV).

The story typifies Peter and John as carrying out the ministry of being the salt and light in the earth. Peter’s boldness is assuredly a sign of the boldness Christ’s light possessed. After healing this lame man, Peter addressed the people around the portico of the temple. He said, “You Israelites, why do you wonder at this, or why do you stare at us, as though by our own power or piety we have made him walk? The God of Abraham, the God of Isaac, and the God of Jacob, the God of our ancestors has glorified his servant Jesus, whom you handed over and rejected… but you rejected the holy and righteous one and asked to have a murderer given to you, and you killed the author of life, whom God raised from the dead. To this we are witnesses. And by faith in his name, his name itself has made this man strong, whom you see and know; and the faith that is through Jesus has given him this perfect health in the presence of all of you.” (3:12-16 NRSV).

Note how Peter immediately directs people’s attention to Christ. He provided an immediate disclaimer that the wondrous workings which functioned through Him were not his but were rooted in the person of Jesus Christ. With this bold statement, Peter proceeded to preach to the people around the temple about the divinity of Jesus Christ. He also laid down the foundation for the gospel.

One can only imagine the amount of courage required of the apostles to express such boldness. But this boldness was not of their own merit; it was a natural side effect of being indwelt by the Holy Spirit, that is, by obtaining the light of Christ.

Peter and John are perfect examples of what the Church must revert to. Being the salt and light of the more is as crucial today as it was during their ministry, if not even more crucial due to the rise of a post-Christian environment. Christianity must reclaim the light of Christ as exemplified in Peter and John, or else we face dire times ahead. Nominalism is a cancerous welt on the Church, and the only way to cure it is repentance and sympathy for the poor and down-trodden.

See how the entire narrative above revolves around the care which Peter and John expressed for the needy man. The man begged Peter and John for alms. In response, the two did not forsake or ignore the man; instead, they “looked intently at him.” The apostles were intentionally poor, hence possessed almost nothing. Yet, their inadequacy did not hinder them from giving what they had to the poor and needy. They gave him a twofold gift which must have transcended his expectation: feet and faith.

Truly, miracles occur when we are in accordance with God’s will and when we fulfill our role as prophets in the marketplace. When we fulfill Christ’s heed that we be the salt and light in the world, we succeed in fulfilling our role as his followers. Moreover, we are able to love God truly along with those around us. Retaining our saltiness still matters, and raising our candle which contains the light of Christ is eternally valuable. There is never a reason to not love our neighbor.

In the following chapter, Peter and John are arrested by the Jewish authorities while proclaiming the gospel in the portico. However, it is written that “many of those who heard the word believed; and they numbered about five thousand” (Acts 4:1-4). A long and dramatic council is conducted due to the preaching of the gospel by Peter and John, who were ordered to cease their evangelization. The apostles refused; eventually, they were released as they could not be punished because of their success among the people (4:18-22).

After this event, Peter and John “went to their friends and reported what the chief priests and the elders had said to them,” (v.23). When the believers heard the news of these things, they praised God “and they were all filled with the Holy Spirit and spoke the word of God with boldness” (v.31). An important detail in this narrative is the fact that the boldness contained within Christ’s light is contagious.

Imagine that you are in a room filled with men holding unlit candles. Initially, the room is dark because there is no flame to illuminate the room. However, picture another man with a match entering the room and lighting a single candle. There is now slightly more illumination, but the room is not yet completely alit. But the man whose candle is lit is now able to see and contains the light the man with the match originally possessed. He is able to offer this light to the other men with unlit candles around him.

By lighting the candles of others, he mimics the work of the man with the match, until eventually, the entire room is alit and everyone can see the beautiful room clearly. Paul supports this understanding, saying  “For now we see through a glass, darkly; but then face to face: now I know in part; but then shall I know even as also I am known” (I Cor. 13:12 KJV). In this manner, Christ’s light and the ministry of the salt and light thereof are collectively contagious.

How can you be more like Peter or John in your workplace?