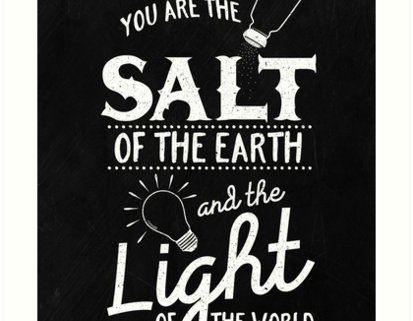 In behalf of Zoe Ministries, I want to greet you a Happy New Year! I pray that this year will be prosperous and meaningful. Today, I want to talk to you about our ministry as Christians. I hope as I cast this vision, you receive it for 2018.

Since their inception, the social ideals of Christianity have long penetrated the fabric of the historical world. At the start of its mission, the social ministry of Christianity flourished throughout the nations, feeding the hungry, housing the homeless, and caring for the orphans and widows. Unfortunately, although there exist large corporations and para-church organizations designed to fulfill these tenants of the Christian order, the Christian laity has become, to phrase it bluntly, lazy. The social ideal of Christianity has been blotted out and pushed to the back burner in favor of ecclesiastical politics.

The social ideal of Christianity can be and has been defined by our Lord as a ministry of salt and light. “You are the salt of the earth. But if salt has lost its taste, how can its saltiness be restored? It is no longer good for anything, but is thrown out and trampled underfoot,” (Matt. 5:13 NRSV). This definition may certainly be lost on many of the gospel’s readers today; however, during the first century, salt was a mineral used to preserve food from spoil. By offering the symbolic imagery of His followers as the salt of the earth, Christ teaches us that our ministry in the world includes counteracting corruption and decay.

The ministry of the Twelve followed this example as they were guided by the divine truth in opposing spiritual, religious, and moral corruption in the world. Similarly, we must follow in their footsteps in seeking to combat the germs infiltrating the world: blasphemy, apostasy, and sin. If we are to change the world in any way, let alone kick-start any social or religious change in a decaying people, we must become the earth’s salt.

What new thing are you calling forth today?

THE SHADOW OF SALT IN THE OLD COVENANT
Scroll to top