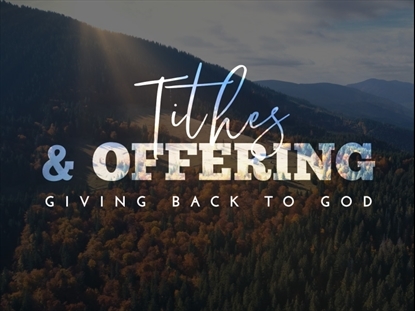 The offering is traditionally translated as the “heave offering” (Exo. 29:2-28, Lev. 14:32, Num. 15-19-21). It is found 76 times in the Hebrew Bible, mostly in Exodus, Numbers, and Ezekiel, which is usually related to the causative verb rûm, “be high,” which suggested it’s raised as an offering to the Lord. The târumah, as we have been discussing, is a contribution for the ministry of the Lord. It goes directly for the personal consumption of the priest. Moreover, the târumah is the setting aside an object from the owner’s domain to transfer it to God’s domain, as an act of dedication.84

The connection between the târumah and the tithe is suggested in Numbers 18:8-24. The offerings were reserved for the priests, since he was giving them no land to farm. All the târumah brought to the Lord, the portions of grain, and the like were not burnt. There is also a portion of the tithes that was designed to the Levites for the same reason. Not all of the tithes went to the priests’ direct consumption, because they needed resources to keep the temple running. The târumah comes in different amounts, unlike the tithe which is a fixed 10%. The târumah depends on the generosity of the person, which the most generous gives 2.5% or more of his increase. The târumah is not the tithe, but the tithe is a kind of târumah.

God said that the Israelites were withholding offerings that belonged to Him, especially the tithes.85 In the present time, a portion of the tithes is allotted for the salary of the priest, as other parts of it go to building rent, utilities, and the like. On the other hand, there are other offerings, which is entirely given to the priest for his nourishment and support. It is important to recognize if you are failing to bring your târumah, even when you are faithfully bringing in your tithe.

The Bible says if you fail to bring your târumah, then you are still robbing the Lord.

Have you ever withheld a tithe? How about an offering?

How do you rob me? – God
Scroll to top