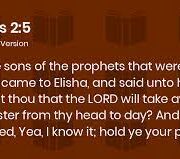 “But speaking the truth in love, grow up into him in all things, which is the head, even Christ : From whom the whole body fitly jointed together and compacted by that which every joint together, according to the effectual working in the measure of every part, maketh increase of the body unto the edifying of itself in love.” Ephesians 4:15

If you are a part of the body of Christ, there is an effective measure in you to bring you into the potential that God has ordained for the whole body. You have something to contribute. Oneness comes from Christ’s filling all things. He fills each one of us; therefore we each have a part of Him to give one another. Your Biblical prophecy lets you know which part you are in the body of Christ. Let the power of prophecy guide you.

When we look at the body of Christ, we are reminded that it is not just the body parts that are important; the joints are also vital. What is a joint? It is any place in your body where two parts come together — the knees, the elbows, the knuckles. Individual members of a body don’t mean much.

They need to be jointed together and working as part of the whole body in order for them — and for the body — to function properly. Members in the body of Christ are the same way; in order to function properly they must be brought into relationship with the rest of the body. And without them, the body will not be as effective.

Sometimes we may feel that our part is not important. Yet the Lord has placed each member of the body there for a purpose. And woe to us if we feel that we, or anyone else, is not a vital part of the body; we are then doubting God’s wisdom.

Know your purpose and start playing your part. Receive your free written prophecy today and act upon what God has purposed for you to do. Speak to a prophet today by clicking here.