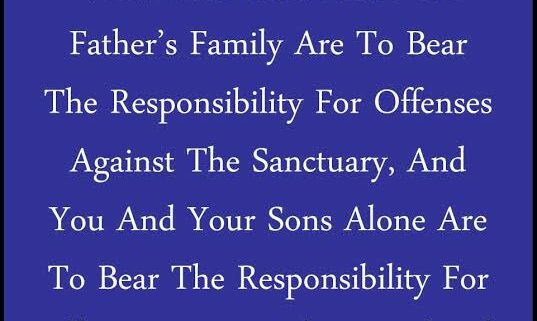 Many pastors around America and the world live on meager salaries from their church, yet they persist in ministry because they have a calling from God. Pastoral ministry involves long hours of sermon preparation, counseling different people, visiting the sick and elderly, sharing the Gospel with those who do not know Jesus, bible and discipleship instruction, leadership succession trainings, and so on. It would also include church administration and church planting work. Only someone who feels the Lord called him to full time ministry would want to take up such heavy responsibility with less than adequate pay.

In the context of ancient Israel, being a priest was not a glamorous job. First off, they did not have land for them to work and to leave as an inheritance to their children. It was literally a dirty and smelly job, considering the slaughter and burning of different animals. It was also dangerous, because they bore the responsibility of safeguarding the sanctuary (Num. 18:1).

The failure to carry out the ministry faithfully could result in one’s death (Num. 18:3). As children, did Levite boys dream they’d one day grow up to be priests? It’s hard to imagine. However, it is why the Lord called and designated a particular tribe and family to be his priests, instead of leaving the job to whoever felt they would do this job.

THE SILENCE OF THE COMMUNITY
Scroll to top