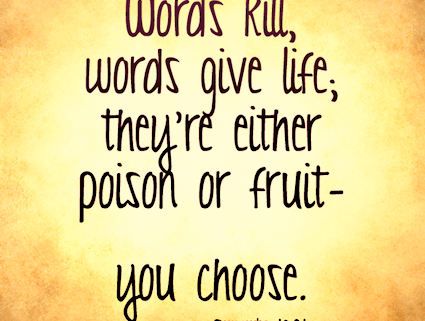 Words have the terrifying power to create and unite, but whether that is for better or worse is up to us. Here we have a group of people united with one goal and vision, and they all speak the same language. The words and sentences they exchanged with each other passed on an idea that was embraced by many.

And yet, for all their teamwork and harmony, the words they exchanged was meant to unite them all against God. Instead of creating something that the Lord can declare as good, they wanted to create something that would make them as if they are God. And so, the Lord decided to mix up the languages of the world, and while the words and intonations vary, the power does not. Used properly as God did in the creation of the universe, we are able to see wonderful things come to pass. Used wrongly, we see entire civilizations come to ruin.+

For truly, as King Solomon said:

4 The words of a person’s mouth are like deep water. But the fountain of wisdom is like a flowing stream.

6 What foolish people say leads to arguing. They are just asking for a beating.

7 The words of foolish people drag them down. They are trapped by what they say.

8 The words of anyone who talks about others are like tasty bites of food.

They go deep down inside you.

20 Because of what they say a person can fill their stomach.

What their words produce can satisfy them. 21 Your tongue has the power of life and death.

This is the true extent of what our words are able to create – in any language. All languages are the language of creation; it is a matter of what you say in that language.

What You Say Matters
Scroll to top