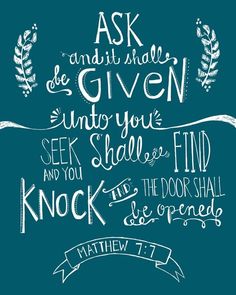 Someone may say, “Well, I’ve asked and I didn’t get it.” In all realness, you have never asked and not received. Perhaps what you thought was asking, was not asking at all. Maybe you were wishing, dreaming, hoping, or even desiring, but you never really asked. Every one that asks receives. There is a secret in asking for that which you desire. You cannot ask with the beginning in mind. You cannot ask from the position in which you stand right now. You have to ask with the end in mind. That is the only real way to ask and receive.

Deep within you must know that you have already received what you ask for before you ask. When you ask, you have to possess the authority of God, meaning that you are asking from a position of power and inner conviction that what you are asking for already belongs to you. Asking, from the perspective of the rich is different than asking from the perspective of the poor. When the poor ask, they don’t really feel like they deserve what they ask for, and generally don’t get anything. The rich ask with expectation of receiving.

The poor ask, and when they do not receive they pretty much act as if that’s normal. They don’t expect much at all. Rich people have an entirely different attitude about things. When they ask, not only do they expect to receive, they will get an attitude, and get all bent out of shape. In their consciousness they do not believe they can or should be denied any good thing. It is that attitude of knowing that ensures that you will receive whatever you ask for.  You have to ask the right way. Ask knowing.

“I didn’t find anything.”  Well, you did not seek.  When you really seek, you always find.  Are you specific about what you are seeking after, or is it somewhat vague?  You have to be clear about what you are seeking.  Whatever you seek, is also seeking you. There is a level of aggressiveness that you have to apply to certain situations in life where you expect results. You say you knocked, but really you didn’t knock hard enough.  Nothing is life is denied you. You have only denied yourself.

Are you asking and not receiving?

Is God Obsessed?
Scroll to top