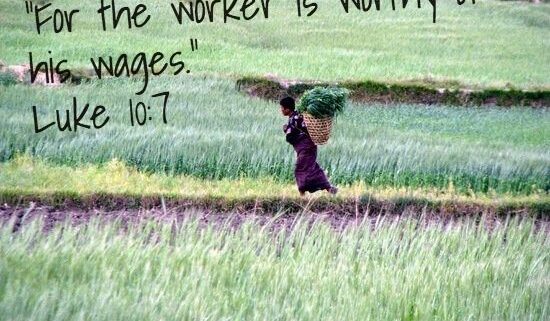 From last week, we come to the account of how Moses waved the offering to the Lord, and then he ate it.

From this instance on, the privilege of eating from the sacrifice would belong to Aaron and his sons, because they would make all the sacrifices. God even clarified it, as evidenced by the following verses:

27 “Here are the parts of the second ram that belong to Aaron and his sons. You must set apart the breast that was waved and the thigh that was offered. 28 It will be the regular share from the Israelites for Aaron and his sons. The people must give it to the Lord from their friendship offerings. (Exodus 29:27-28)

Such offerings became God’s permanent provision for the priesthood. The people brought their offerings to God, and in turn God gave the priests their portion. The priests ate their share. In other words, these offerings were intended to be consumed by the priests.

What is the bigger picture? God does not expect His people to serve Him in full-time ministry for nothing. He does not expect pastors to leave their professions to do pastoral work without having no provision to feed himself or his family. God is not like that. God provides for His church. What more for His priests? He promises to provide for everyone’s needs, and this includes those who are in full- time ministry.

In the Old Testament, God provides for His priest by giving them a portion of the sacrifice. It is the similar context in the 21st century church. A portion of the tithes and offerings are given to the minister to provide for him and his family.

What is your part to play in the big picture?

MYTH: Pastors SHOULD be poor
Scroll to top