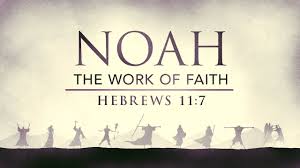 The glory of God keeps radiating over our lives as long as we stay put in Him and keep our faith in His word very strong in our hearts and lives.

Noah received directives and instructions from God and he went ahead to act on it.

Another person we can learn from is Noah. Noah was a man that lived before the flood that wiped out the whole of the human race. He was married and had a family of three children. Scripture tells us that Noah found grace in the sight of God and God chose to carry out His plan through him. Noah received directives and instructions from God and he went ahead to act on it. He began to build an ark for the saving of people and animals. He built something that no one had ever seen before then. He was simply responding to the prompts of God.

Noah answered the call of God upon his life and for many years, he kept building until the ark was complete. After this, he led the animals after their kind into the ark and also his family. The people on earth in those days made a mockery of him and did not join in the ark. Therefore, when the rains came down heavily and floods took over the earth, every living creature felt the massive effect of this. There was loss of life. The only ones that were alive where those in the ark. God Himself preserved them and at the right time, the ark landed on the mount.

God always has a way of bringing His will to pass in our lives. Even when men arise and try to stop His plan, God knows how to have His way every time. He is a man of war and can solve any problem that is tabled before him.

God desired to start a new race, a new generation of men and women that will please Him and do as He instructs them to.

In the time of Noah, God was concerned that mankind was tending towards evil all the way. He was concerned that His dear creatures which He created were beginning to allow sin and the devil to lead them into their own destruction. God was and still is always out to save us. Scriptures tells that God regretted creating man. In a way, they became very rebellious against God and God had to do something about this challenge early on. This was how Noah came to the scene. God’s instructions were very clear and could not be put aside. In the book of Hebrews, we are told this about Noah,

“By faith Noah, being warned of God of things not seen as yet, moved with fear, prepared an ark to the saving of his house; by the which he condemned the world, and became heir of the righteousness which is by faith.” (Hebrews 11:7, KJV)

This reveals that Noah feared God and decided to respond to the promptings of God for the time and season that he was at that time of life.

SUBSCRIBE
God has a way of redeeming the time