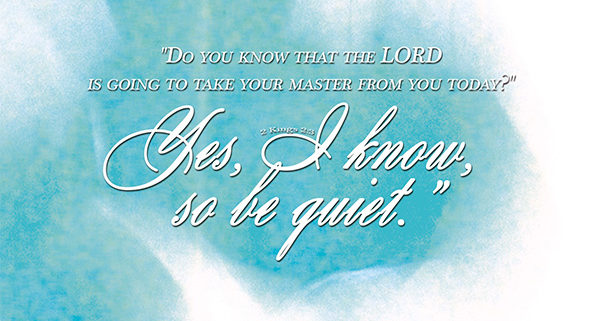 The Book of Second Kings 2 shows us the fourth river by which prophecy can flow from. Elijah was about to leave and Elijah who had been following him all these years was going to take over his position. We have discussed this account before wherein there was a group of people in 2 Kings 2:3, “The company of the prophets at Bethel came out to Elisha and asked, ‘Do you know that the Lord is going to take your master from you today?’”

These men were actually just sons of prophets. They seem to know something about what God is doing, yet they do not have authority, which was why Elisha told them to be quiet. During this time, they became like their fathers. They were able to prophesy.

These sons of prophets grew up seeing their fathers take the harp and sing praises to God from morning until evening. The sons of the prophets grew up in a prophetic environment. They grew up in this kind of atmosphere and they knew these prophets regularly. The sons’ association to the father allowed them to receive a prophetic impartation. Very soon, the children caught on into the prophetic river of association and fellowship.

Fellowshipping with the prophets allow prophetic flow to come into your life. When you invest time being with them, and just being mentored, the prophetic flow comes by association. Saul came in the presence of the prophets on the hill and he prophesied. He prophesied even when he was not anointed as a prophet. No one laid hands on him to receive this gift. The strength in the anointing of people allows you to move in the prophetic if you spend enough time with them. Prophets band together to strengthen the flow of the Spirit of prophecy in each other’s lives.

The gifts of God may flow through you, but they don’t bypass you. You deliver the prophetic word in the way you speak. It doesn’t change your identity. The same God can flow through different people with different personalities. However, if you have sin and things of the flesh present in your life, and you try to tap into the things of God, your nakedness will be revealed. Saul’s nakedness was revealed when he was exposed to the prophetic. There is an anointing that can come as a result of association and fellowship with the prophets, but it doesn’t mean you become clones of these leaders. God does not make you into clones. He makes disciples.

Name one or two prophets whom you feel you have received

prophetic impartation from in the past because of association.