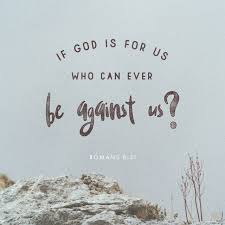 Napoleon had no fear in battle because he believed a bullet that could kill him had not been made. Even though he was small in size, he was not a dwarf in his mindset. Mark Twain said, “It is not the size of the dog in the fight, it’s the size of the fight in the dog.” Napoleon had no hesitation when it came to attempting a seeming impossibility because he believed the heavens were on his side and that the very stars would swoop down to clear the obstacles from his path.

Who is in you? John tells us, “You, dear children, are from God and have overcome them because the one who is in you is greater than the one who is in the world” (1 Jn. 4:4). In an epistle, Paul said, “What, then, shall we say in response to these things? If God is for us, who can be against us?” (Rom. 8:31). Napoleon was depending on his ego and self-trust, and he was able to accomplish greater feats than most people in his generation ever could.

If you are hinged on the goodness and faithfulness of God in your life, then what can’t you do? You are doing this for God’s greater glory. Are you worried about your mortgage? Are you fearful for not being able to provide for your children or your medical bills? Maybe you are frustrated because of the things you want to do but cannot do because of the lack of funds. Let me tell you this — it’s not your problem.  It is He who is in you who is able to accomplish God’s purposes for your life.

SUBSCRIBE
The Power of Being Where You’re Supposed to Be

Bless the Rich
Scroll to top